This was the first Eclipse Day Delft - A Summary

Last week, the first Eclipse Day Delft has taken place. With eleven fabulous speakers and more than 60 participants this day was a great success.

Erik Meijer opened the day by showing the participants how to program a teapot visualization in HTML, and inviting all to re-implement this in their favorite programming language. 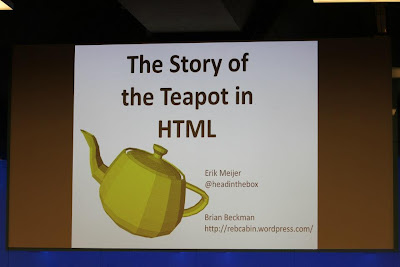 The first session was started by Patriek van Dorp, who showed with a live-demo how Eclipse can be used to deploy Java to the Microsoft Cloud. After that, Marcel Bruch presented the helpful Eclipse Code Recommender tool, which can predict which code statement you are (likely) going to type next. The final talk in this session was given by Pupier Aurelien, who showed how the power of GMF can be leveraged. 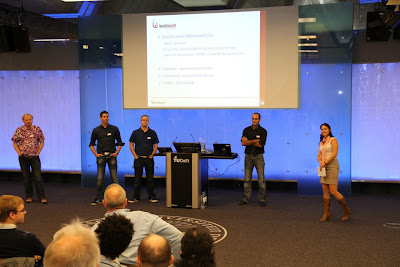 After a very communicative coffee break, Koen Aers took over the stage and showed how the Forge command-line tool can be integrated in Eclipse. Afterward, I presented the results of the Eclipse Study on how Eclipse-based products are tested, with the title "Test Confessions". 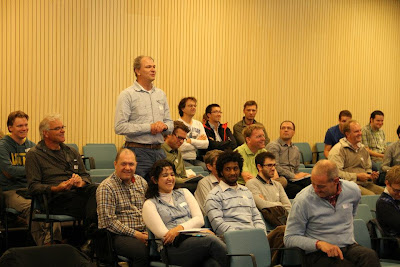 After the lunch break, Sven Efftinge showed how Xtext allows to reuse and integrate all kinds of Java language constructs right in your language, by demonstrating one of the seven languages based on Xtext. Then, Matthias Kempka explained the recipe for successful Eclipse-based products, and Werner Keil talked about continuous delivery. 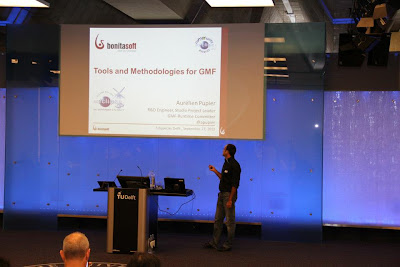 The last session focused on model driven development, and was kick-started by Martin Taal, who showed how EMFT Texo can bring modeling to the mobile web. Subsequently, Ed Merks outline how modeling for programmers and programming for modelers works with Xcore.

Finally, there was time to network and talk while enjoying some drinks and snacks. Organizing this event was a great experience and adventure, and I enjoyed it very much. All slides of the talks are online. You can find more pictures of the event here.

Posted by Michaela at 4:17 PM No comments:

We are proud to announce that Erik Meijer will open the first Eclipse Day Delft on the 27th of September.

Erik Meijer is a professor at the Software Engineering Research Group at Delft University of Technology and head of the Cloud Programmability Team at Microsoft in Redmond. Erik's primary focus has been to remove the impedance mismatch between databases and programming languages. This efforts led to LINQ (Language Integrated Query). LINQ is a Microsoft .NET Framework component that adds native data querying capabilities to .NET languages, and through ports can also be used with Java, PHP, JavaScript and ActionScript.

The opening of Erik Meijer rounds the excellent program of the Eclipse Day Delft off.
Be part of this great event, learn and discuss about tools and techniques to support the software development process, and make new valuable contacts.

Thanks to all our sponsors, we still have few free registration tickets available for this event. Register here or find out more at Eclipse Day Delft.
Posted by Michaela at 10:52 AM No comments: 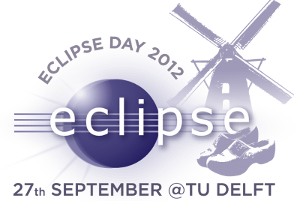 It's time to get your great submissions ready for the Eclipse Day Delft in the Netherlands. The submission deadline is approaching: Juni 27 update: 12 July, 2012. The topic is facilitating software engineering with Eclipse technology! Share your experience, tools and techniques and send your proposals to Eclipse Day Organizers. More contributions details here.
Posted by Michaela at 7:57 AM No comments:

A study by M. Greiler, A. van Deursen and M. Storey.

Testing component-based systems in general, and plug-in based products in particular, is a daunting task; the myriad of plug-in combinations, versions, interactions, and configurations gives rise to a combinatorial explosion of possibilities. Yet in practice, the systems assembled from plug-ins are widely used, achieving levels of reliability that permit successful adoption.

So which test techniques are used to ensure plug-in based products have adequate quality levels? How is the combinatorial explosion tackled? Are plug-in specific integration testing techniques adopted?

Answering questions like these calls for an in-depth study of test practices in a community of people working on plug-in based applications. To that end, we conducted a qualitative study, in which we interviewed 25 senior practitioners about how they test plug-ins and applications built on top of the Eclipse plug-in framework, and challenged the results by a structured survey of more than 150 professionals. The outcome is an overview of the testing practices currently used, a set of identified barriers limiting the adoption of test practices, and an explanation of how limited testing is compensated, which we will present on Wednesday June 6 2:00pm at ICSE 2012.

In summary, the study reveals a strong focus on unit testing, while the plug-in specific testing challenges and practices are tackled in an ad-hoc and manual manner. This lack in plug-in specific integration testing is due to several barriers, such as unclear responsibilities for system integration, a lack in resources and knowledge about plug-in testing, long test execution times and many more. This lack of explicit testing beyond the unit scope is compensated for by self-hosting of projects, the process whereby the software developed in a project is used internally on a regular basis, and the involvement of the community.

We hope to see you all on Wednesday @ ICSE 2012. Slides are now online:
ICSE 2012: Test Confessions - A study of testing practices for plug-in systems
View more presentations from Michaela.
Posted by Michaela at 11:10 AM No comments:

Eclipse is happening in the Netherlands

In 2012, the first Eclipse Day will take place in the Netherlands on 27 September, 2012. It will be held at the Congress Center of the Delft University of Technology. 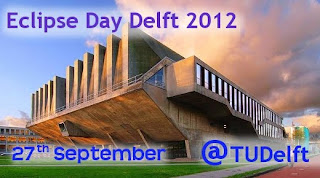 This year, the Eclipse Day in Delft will focus on tools and techniques to support the software development process, including software maintenance.

Call for Contribution
Call for papers is now open! If you would like to present your exciting tools or techniques to support software development or maintenance, or share an experience report at the Eclipse Day Delft 2012 please send your proposal by June 27, 2012 to eclipsedaydelft@gmail.com. For more details on the proposal format and requirements see the Call for papers.
Posted by Michaela at 8:55 AM No comments:

In a month, the 2nd Eclipse Testing Day in Neuss, Germany takes place. At this event, I will talk about the task of understanding plug-in test suite.

Testing plug-in based systems entails testing a complex net of multiple plug-ins which not only interact with, but also enhance the functionality of each other by extension mechanisms.
In the Eclipse Testing Study, testing practices of successful Eclipse projects have been studied. Among others, Eclipsers stress integration testing as an important testing activity for plug-in systems, and explain that understanding complex plug-in test suites can become a challenging task.

Understanding test suites is an essential precondition to be able to evaluate, enhance, and improve a given test suite. Thus, to remedy the problem of understanding plug-in test suites, we developed the Eclipse Plug-in Test Suite Exploration (ETSE) tool. ETSE combines static and dynamic information on plug-in dependencies, extension initialization, and extension or service usage during a test run. This information is used to create five architectural views of the system under test and its test suite, which developers can use to understand how the integration of multiple plug-ins is tested.

The architecture of ETSE is illustrated in the Figure below. First, the information gathering phase is responsible for collecting dynamic data, coming from the instrumentation of the test runs, as well as static data (e.g., manifest file, source code, plug-in.xml). This information forms the source views, which are further processed in the knowledge inference phase. Here the source views are transformed into five target views, representing the system under test and its test suite from an integration perspective. In the last phase, the target views are visualized for the developer or tester by the ETSE Eclipse plug-in.

At the Eclipse Testing Day, I will talk about plug-in test suites and present the architectural views, which help answering questions like: “which plug-ins are tested by this test suite?”, “where are test harness and test utilities located?”, “which extensions influence the state of the test system?”, and many more. During a short demonstration of ETSE the test suite of the well-known Eclipse project Mylyn will be analyzed and visualized.

More technical details on ETSE and the approach behind can be found here.

About the Eclipse Testing Day
The 1st Eclipse Testing Day took place last year and was a great success. Also in 2011, this event provides the opportunity to get in contact with Eclipse testers, developers and managers, and to exchange experiences about testing.
Registration is possible until 5th of September via Eventbrite

Posted by Michaela at 4:09 PM No comments: 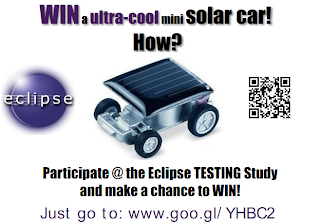 As an Eclipser testing matters to you! But when and why do you adopt a given testing approach? How do you test the integration of multiple plug-ins? Please take some minutes and share your experience in the Eclipse Testing Survey.
Click here to take survey!

What is the study’s aim?
This survey aims to shed light on the testing culture within the Eclipse community. The anonymized results of the study will be compiled and made available.

How to participate?
Please fill in our online survey at www.goo.gl/YHBC2

Who conducts the research?
The research is promoted by the Software Engineering Group at the Delft University of Technology. The study is designed by Michaela Greiler and Professor Arie van Deursen.
Posted by Michaela at 7:07 PM No comments:

Click the Button to participate at the Eclipse Testing Survey